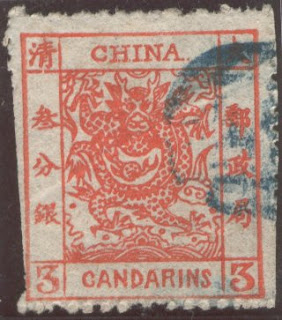 This copy of the 3 candareens large dragon, is on thicker paper with rough perforations; one of the later printings. It does not conform to the standard ideals of stamp beauty, but it has proved a very interesting item.

The postmark is an indistinct seal cancel in blue-black in the top right quarter of the stamp, more of a smudge than a postmark really. The condition is fresh looking but with a diagonal light crease across the stamp.

Perforations are worse than the standard 'rough'! The margins are cut into at either side, but this is probably evidence of poor perforating and I believe the cuts were done at the post office to separate it from the sheet rather than after use.

The copy is (mostly) heavily inked in a bright shade of red (pinkish-vermilion) and from a worn cliche - much detail is lost, especially on the dragon's body.

One can appreciate, from this stamp, why the large dragons were soon discontinued, it appears almost a caricature of well printed examples. (The comments in Ireland at the end of the section on the settings of the large dragon, p.93, are pertinent here.)

The bottom left corner and lower frameline appears under inked and weak. This may possibly be due to scuffing in use rather than poor printing, but there is no evidence of damage under the microscope.

Features which identify the cliche as 24

There are two clear proof dots - I make them at 1.5 x 4.75 mm and 2.25 x 3.75mm. (Measurements are in mm from the framelines, horizontal distance first). They are just visible on the scan (see following article - it seems I can only get one image in this blog!). This doesn't exactly correspond to any on Ireland's list, although the second exactly corresponds to the one proof dot he lists for cliche 24.

The lower line of the middle fin is just a dot - according to Ireland a feature of cliches 1, 5 and 14; he reckons cliche 24 should show no lower line at all.

The proof dot at 2.25 x 3.75 appears under magnification as a short uneven line about 0.2 mm long rather than a dot. It is angled at about 15º to the the east of vertical. It is almost an upside down exclamation mark on this copy, with only a very thin line of colour joining the line to the dot.

The 'new' proof dot is small but with an irregular shape, almost star like, under 50x magnification.

The right hand outer frame line seems more heavily inked, suggesting a stamp from the right margin of a sheet (Purves theory, related by Ireland p.60), which may be useful evidence in plating one of the later settings, about which little is known at present.

I believe that this is a copy of cliche 24 and that the explanation for the extra proof dot and the dot for the lower line of the middle fin is that the wear on the cliche combined with the heavy inking has exposed these projections that did not print on earlier impressions. The alternative is that these two marks were formed by foreign matter trapped temporarily in the cliche, which seems far fetched, especially to get such a mark to correspond with the lower fin.

If my theory is correct we must be careful in using some of the tried and tested identification techniques when examining copies of the large dragons from the later printings.